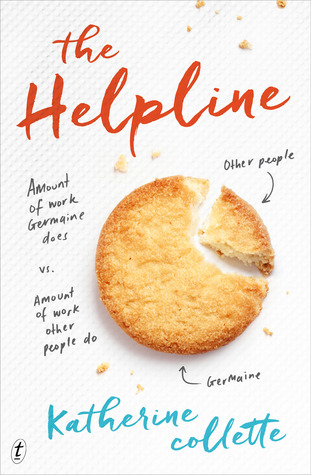 Title: The Helpline
Author: Katherine Collette
Publication: July 23rd 2019
Synopsis: Germaine Johnson may not be all that good with people but she’s great with numbers. Unfortunately, as she discovers after the incident at Wallace Insurance, there are very few openings these days for senior mathematicians.

Then her cousin gets her a job at the council. On the Senior Citizens Helpline.

It’s not the resume entry Germaine wanted—but it turns out Mayor Verity Bainbridge has something more interesting in mind for her. A secret project involving the troublemakers at the senior citizens centre and their feud with the golf club next door. Which is run by the strangely attractive Don Thomas.

A sharp, witty, big-hearted comedy from a hilarious new Australian writer, Katherine Collette’s The Helpline is about people power and brain power—and the difficulty of getting them to work together.

I received an ARC from Simon Schuster Canada in exchange for a honest review.

This one definitely took a long time for me to finish and it’ll probably take a long time for you too if you’re not a fan of a robust character like Germaine. Similar to Eleanor Oliphant is Completely Fine, Germaine very much likes routines and hard data and numbers. She doesn’t believe she belongs in the life she’s currently living in. For example, she believes her biological father was a prestigious professor in a big university because that was what her mother made her to believe and it can be the only logical explanation as to why she’s so logical while her mother is..not.

It’s fun to read about a quirky character like Germaine who doesn’t understand human emotions or why what she does is important to the neighborhood around her. She doesn’t understand why her job needs to even exist at one point. Instead of answering phonelines, repeating the same answers over and over again, she believes in technology and having a formula to help people as fast as possible without human interaction or connection.

It can also be really frustrating to read. I admit halfway through, I was dragging my feet to read because Germaine isn’t a character to magically change into someone you would like after a chapter. It takes a lot of effort and an event that impacts her and that’s why the ending was so satisfactory and it was great to see her fully envelop herself with her friends.

I would suggest you to read this if this is the quirky novel you’ve been craving!