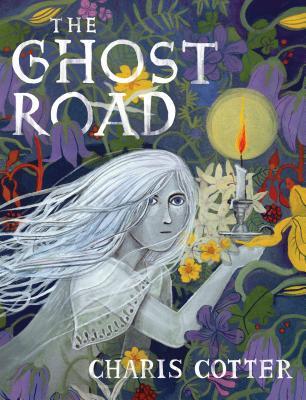 Ghosts, a family curse, buried secrets — and two girls who have to figure it all out. A new book from an acclaimed author, for fans of Coraline, Doll Bones and The Night Gardener.

For the first time, Ruth is heading to Newfoundland to stay with family she’s never met instead of spending the summer traveling with her dad. When she arrives, she finds Newfoundland is very different from her life in Toronto–people there are much more friendly, but also superstitious, believing in ghosts and The Sight and family curses. Ruth’s cousin Ruby is also staying for the summer, and the two discover they have a lot in common: they both lost their moms when they were two years old, they’re the same age and they even like the same food. But while Ruby believes in spirits and fairies, Ruth believes in science and cold, hard facts.

When they find ominous information on some tombstones in the local cemetery, Ruth and Ruby start investigating their family’s past and discover that twin girls are born in every generation, and every set of twins dies young, leaving their children without mothers. What’s more, one of the twins always has The Sight and can see the Ghost Road that leads to the mysterious lost settlement of Slippers Cove. What happened there? What does it have to do with their family? And who is the ghostly presence that keeps visiting Ruth late at night?

The answers lie somewhere along the Ghost Road . . . if they can only find it

I received an ARC in exchange for a honest review from Penguin Random House Canada!

Do not judge a book by it’s cover nor should you ever judge a book by it’s direct audience age. I must admit when I first received the copy of The Ghost Road, I was very skeptical. I wondered if I would actually enjoy it because young readers or middle school age novels weren’t really my thing. I find the writing to be too simplistic at times but Charis Cotter has a way with words that made it a perfect blend of middle grade and young adult level of writing. The cover may not be the most attractive thing you’ve seen but it’s really the inside that counts! I’m serious.

The Ghost Road follows the tale of Ruth. Her mother has passed away since she was very young so she has little to no memory of her. Ruth lives in Toronto but during the summer, when her father decides to travel overseas to study flowers with his new wife, she’s sent to Newfoundland and Labrador to meet an aunt and cousin she knows nothing about. There’s mystery surrounding Ruth’s mother. Although Ruth’s mother grew up in NFL, she hardly mentions it to Ruth. Ruth knew nothing about the province on the east coast of Canada. She didn’t know any of the folklore, her identical looking cousin, Ruby, knows so much about and she doesn’t know anything about the family history. Apparently, Ruby’s mother was a twin sister of Ruth’s sister. What was strange was that they both happened to die at the same time and same day. Meanwhile, Ruth and Ruby look exactly alike and I forget, but I think their birthday was significant as well.

This all built up to the idea that in the family line, one twin will be gifted the sight. The Sight allows them to see the infamous Ghost Road. Meanwhile others can’t see it for the life of them. It was definitely some spooky and scary stuff that left me turning the pages and wondering what in the world was actually going on!!

I found this book to be so entertaining. The chapters were short so it kept me intrigued and wanting to sit through and binge ten chapters at a time. And Charis did an amazing job at leaving each chapter on a hook that made you want to read more. As more chapters went on, more secrets and clues were revealed that allowed readers to piece together an idea of what was going on. Of course, I didn’t! And I couldn’t pin down the exact answer to things.

Definitely pick this one up for Halloween. It’s spooky!!!

One thought on “Book Review + Blog Tour: The Ghost Road by Charis Cotter”